From programmers desk tool to hacker’s playground Pastebin has become the most famous space. For millions of people who have shared their texts and code snippets using Pastebin consider it as their fancy tool. It is popular when it comes to sharing work with the peers across the web. Pastebin tool has been used right from start in 2002 but gained popularity when used for some wrong purpose. On the one hand, developers used Pastebin to share their useful code.  While on the other hand, some undisciplined people “hackers” used it as hacking space.

Well, Pastebin is a web application used by programmers to copy their codes. It is also an application that allows you to store the text. The main idea behind developing was to help programmers store the chunk of codes and data to show people how certain programs work or help them with collaboration. But once when this programming space was attacked by hackers it became a widespread topic to talk about. This led its user base to decrease. Nevertheless, there are many programmers who still use it feeling safe sharing their data and codes.

What exactly is Pastebin Text Tool?

Pastebin is a popular website used for storing and sharing of text using the web. It is used for storing and distribution of legitimate data but is also used as the public repository of stolen information like hacking network configuration details and authentication records. Pastebin, a web application allows users to upload data and share online with others offering help. It is largely used by the programmers for sharing of the codes on chats, forums or any other social network or websites. Once using the mini tool of Pastebin, you any or all of your useful text is pasted then other users can edit it making it useful for the programmers. Here each of the edits has some unique address which makes it easier to share the large piece of content or texts on the websites or social network.

Well, now since you are aware of the use of the Pastebin the next step to move forward with it is to learn how the Pastebin web app is used. These simple steps will help you understand the working of this best Pastebin text tools.

1- Look for some text or code to share with others.

3- Open the web page, you will find a mini tool box to enter the above text. Then click on create paste. You will be provided with URL that will contain the text file. 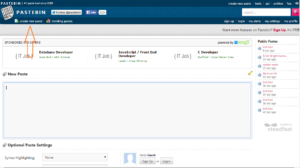 Step 4- Now since you have the URL, so you can share this URL online with other programmers instead of the long text using chats, forums, social networks or any other micro blogging sites.

Step 5- Lastly, people will now click on the shared URL so as to access the text documents or codes.

What is popular on Pastebin?

It has a simple answer for Pastebin is one of the easiest and convenient ways of sharing and storing of the text documents. Being a programmer you wish to share generated codes with your client but practically it becomes complicated providing him with the codes using chat text box or email. Use Pastebin, where all you have to do is paste the URL address to share with your client instead of large doc. In this way your client will be able to access the code directly without trouble by clicking the paste URL. Another reason Pastebin text tools are getting popular is if you are a part of any community or forum, sharing of code can be done easily by pasting the URL.

Why is Pastebin famous among Hackers?

The Pastebin in recent times became a favorite ground for hacker’s community for stealing of the data and codes. There are several attributes that highlight the Pastebin Text tools as one favorite tool for hackers-

Attacking Pastebin by hackers became more popular by its latest released and very useful feature.  It could automatically find the stolen data on Pastebin. To  keep away the hackers stealing programming codes Pastebin recognizes for the signatures that indicate sensitive data. The developers of Pastebin have created the non-defunct tool called as PastebinLeaks. It promises to automatically identifying the stolen data articles after pasting on the Pastebin tool. The feature proved to be secure and quite accurate in its findings. Another such tool is LeakedIn (http://www.leakedin.com/) that gives same service.

There are certain services that come with this Pastebin Text tools like Spaste and Binbucks. They pay you for creating and sharing your paste URLs. All you need to do is create a paste URL using your text document.  Then share it using the web among your friends and clients. Whenever the other person clicks the paste URL, the 5 sec ad will appear. Click on ad and enter CAPTCHA code will add you money before directing to the destination page containing code document you shared.

It is very easy to use and is very convenient to find a space to submit a new paste. The highlight of this best Pastebin text tools alternative is you can bold, italicize and underline the text. You can even protect your pastes with a password. 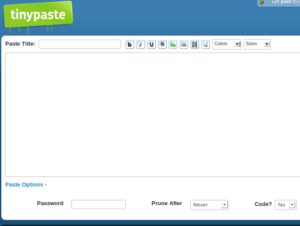 It is another one of the best Pastebin text tools alternative available. Here you just not only create paste but also select the programming language and the deletion time.  This makes it accessible to limited public.

Use it now from HERE

It is one of the most visually appealing and best Pastebin text tools alternatives. It boasts the quickest paste and selection of the text. You can even create a new paste, duplicate and edit your paste. Additionally view raw text and share your paste anywhere on the web.

Use the tool now

To know the importance and popularity of best Pastebin text tools one must try Pastebin. Moreover, it is all the matter of preference.  You can choose any of the Pastebin tools available for they are equally effective. 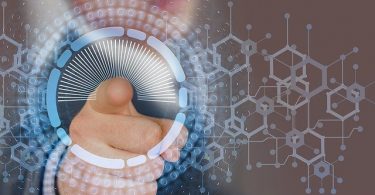